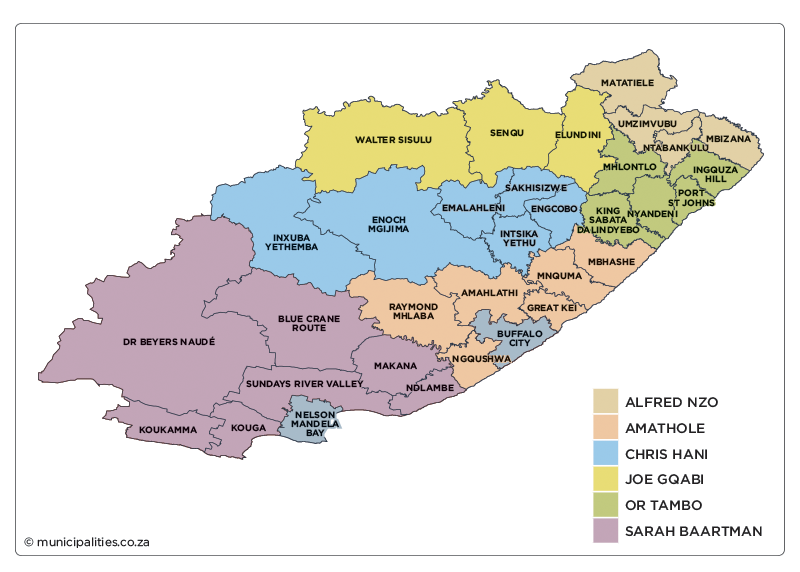 The Eastern Cape is located on the east coast of South Africa between the Western Cape and KwaZulu-Natal provinces. Inland, it borders the Northern Cape and Free State provinces, as well as Lesotho. The region boasts remarkable natural diversity, ranging from the semi-arid Great Karoo to the forests of the Wild Coast and the Keiskamma Valley, the fertile Langkloof, and the mountainous southern Drakensberg region. The Eastern Cape’s main feature is its spectacular coastline bordering the Indian Ocean.

It covers an area of 168 966km² and has a population of 6 996 976. It is the second-largest province in South Africa by surface area and has the third-largest population. The capital is Bhisho. Other major cities and towns include Port Elizabeth, East London, Makhanda (previously Grahamstown), Mthatha (previously Umtata), Graaf Reinet, Cradock and Port St Johns.

The Eastern Cape is one of South Africa’s poorest provinces incorporating large areas of South Africa’s former homelands. The Eastern Cape has excellent agricultural and forestry potential. The fertile Langkloof Valley in the south-west has enormous deciduous fruit orchards, while the Karoo interior is an important sheep-farming area. The Alexandria-Makhanda area produces pineapples, chicory and dairy products, while coffee and tea are cultivated at Magwa. People in the former Transkei region are dependent on the farming of cattle, maize and sorghum.

The metropolitan economies of Port Elizabeth and East London are based primarily on manufacturing, the most important industry being motor manufacturing. The province is the hub of South Africa’s automotive industry.


The information in this directory is compiled from various sources and is subject to continual change. If you notice any errors or omissions, contact us so that we may correct them.
ADVERTISEMENT
ADVERTISEMENT