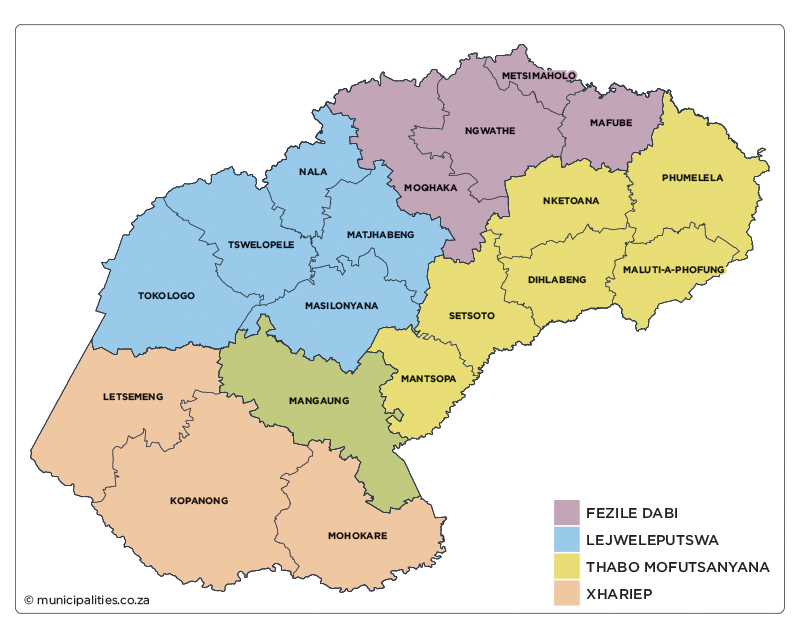 The Free State is located in the geographical centre of South Africa, bordered by the Northern Cape, Eastern Cape, North West, Mpumalanga, KwaZulu-Natal and Gauteng provinces, as well as Lesotho. The Free State is a rural province of farmland, mountains, goldfields and widely dispersed towns.

Although the Free State is the third-largest province in South Africa, it has the second-smallest population and the second-lowest population density. It covers an area of 129 825km² and has a population of 2 834 714 – 5.1% of the national population. Its capital is Bloemfontein, which is South Africa’s judicial capital. Other important towns include Welkom, Kroonstad, Sasolburg and Bethlehem.

The economy is dominated by agriculture, mining and manufacturing. Known as the ‘bread basket’ of South Africa, about 90% of the province is under cultivation for crop production. It produces approximately 34% of the total maize production of South Africa, 37% of wheat, 53% of sorghum, 33% of potatoes, 18% of red meat, 30% of groundnuts and 15% of wool. The province is the world’s fifth-largest gold producer, with mining the major employer. It is a leader in the chemicals industry, being home to the giant synthetic-fuels company, Sasol.