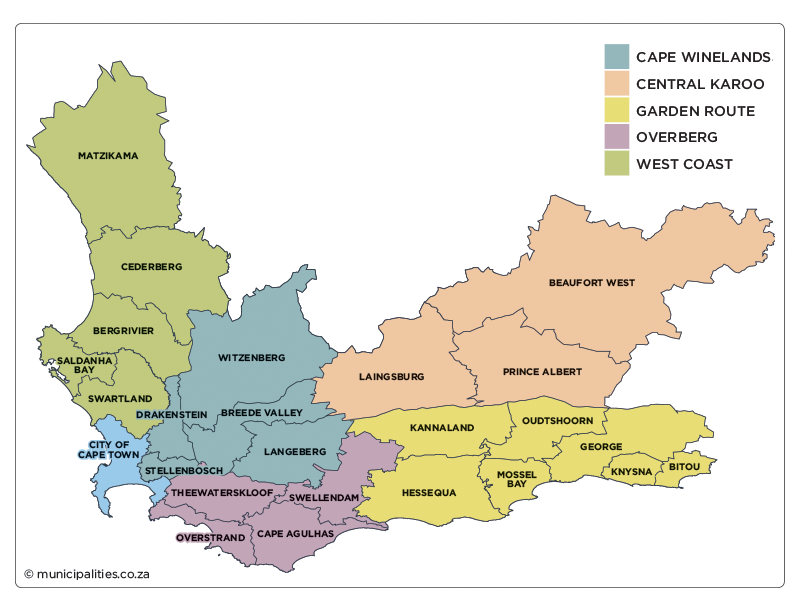 The Western Cape is located on the southern tip of the African continent between the Indian and Atlantic Oceans. It is bordered by the Northern Cape and Eastern Cape provinces. The Western Cape’s natural beauty makes the province one of the world’s greatest tourist attractions. The region is topographically and climatically diverse. It has a temperate southern coastline fringed with mountains. To the north it stretches deep into the Karoo plateau, while the west coast is extremely dry.

It covers an area of 129 462km² and has a population of 6 279 730. It is the fourth-largest province in South Africa by surface area and also ranks fourth in population. The capital is Cape Town. Other major cities and towns include George, Knysna, Paarl, Swellendam, Oudtshoorn, Stellenbosch, Worcester, Mossel Bay and Strand.

The Western Cape is rich in agriculture and fisheries. The climate of the peninsula and the mountainous region beyond it is ideal for grape cultivation, with a number of vineyards producing excellent wines. Other fruit and vegetables are also grown here, and wheat is an important crop to the north and east of Cape Town. Fishing is the most important industry along the west coast and sheep farming is the mainstay of the Karoo. The province has a well-established industrial and business base, and the lowest unemployment rate in the country. Sectors such as finance, real estate, ICT, retail and tourism have shown substantial growth, and are the main contributors to the regional economy. Many of South Africa’s major insurance companies and banks are based in the Western Cape. The majority of the country’s petroleum companies and the largest segment of the printing and publishing industry are located in Cape Town.


The information in this directory is compiled from various sources and is subject to continual change. If you notice any errors or omissions, contact us so that we may correct them.
ADVERTISEMENT
ADVERTISEMENT