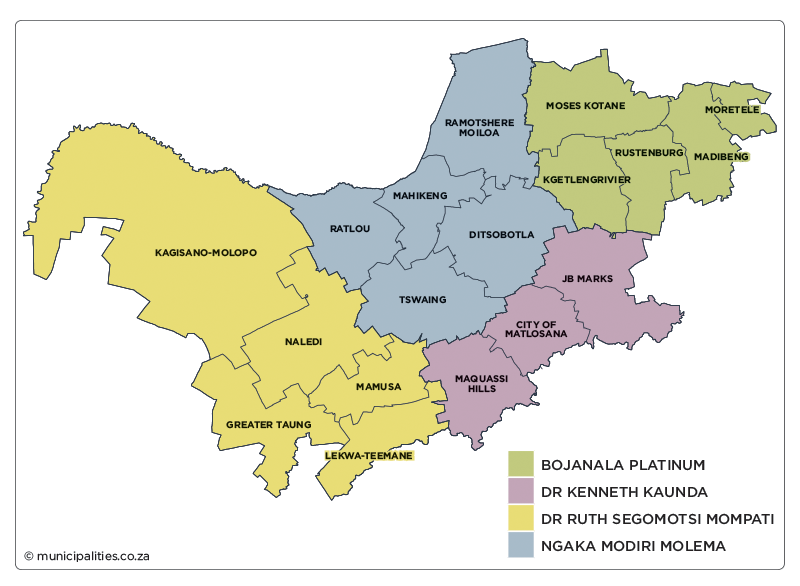 North West lies in the north of South Africa on the Botswana border, fringed by the Kalahari Desert in the west, Gauteng province to the east and the Free State to the south. It covers an area of 104 882km² and has a population of 3 748 436. Much of the province consists of flat areas of scattered trees and grassland. The Vaal River flows along the southern border of the province.

Mahikeng (previously Mafikeng) is the capital. The city lies near the Botswana border and forms a single urban area with its neighbouring town, Mmabatho. Potchefstroom and Klerksdorp are the biggest cities in the province. Other main towns are Brits, Rustenburg, Klerksdorp and Lichtenburg.

Most economic activity is concentrated in the southern region between Potchefstroom and Klerksdorp, as well as Rustenburg and the eastern region. Mining is the major contributor to the North West economy and represents almost a quarter of South Africa’s mining industry as a whole. The Rustenburg and Brits districts produce more platinum than any other single area in the world. North West also produces a quarter of South Africa’s gold, as well as granite, marble, fluorspar and diamonds. North West has a number of major tourist attractions, including the internationally famous Sun City, the Pilanesberg National Park, the Madikwe Game Reserve and the Rustenburg Nature Reserve.

North West is well known for cattle farming, while the areas around Rustenburg and Brits are fertile, mixed-crop farming land. Maize and sunflowers are the most important crops, and the province is the major producer of white maize in the country.